Posted by Eliza Posted on October 15, 2022
Posted in Bankruptcy Lawyers 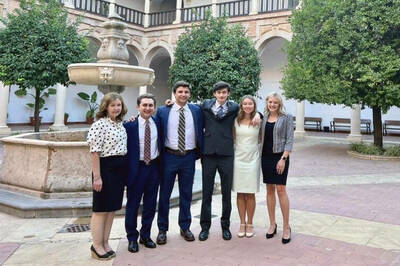 The Notre Dame Law School Moot Court Board started off the academic year strong with victories at the International Moot Court Competition in Law and Religion, hosted by the International Consortium for Law and Religion Studies. The competition took place at Córdoba Law School in Córdoba, Spain, on September 16 and 17, and served as the kickoff event to the 6th ICLARS Conference, which centered on the theme “Human Dignity, Law, and Religious Diversity: Designing the Future of Inter-Cultural Societies.”

The participating Moot Court Board members included Matt Delfino, Shannon Moore, Leo O’Malley, Michael Snyder, and Taylor Wewers. Oralists were split into two teams: Delfino and O’Malley argued a case as though it were before the United States Supreme Court, while Snyder and Wewers argued a case in front of the European Court of Human Rights. Moore served as a brief writer, while the Moot Court Board faculty advisor, Professor Christine Venter, coached both of the teams.

In the Supreme Court of the United States division, Delfino and O’Malley competed with five other teams and tied for “Best Team” with Brigham Young University.

The Notre Dame team submitted four 20-page briefs in total, with each division advocating for both sides of the issues given to them. The statement of facts presented to each division revolved around a similar issue: whether a Muslim woman’s religious rights were violated after she was asked to remove her hijab as part of a new security system protocol involving AI facial recognition technology. All teams were assigned a side to defend in the oral round, during which each team had 30 minutes to argue their side of the case.

Both Delfino and Snyder expressed that they had never explored religious liberty in any official capacity prior to participating in this moot court competition. In his oral argument for the European Court of Human Rights division, Snyder focused on Article 14, which pertains to nondiscrimination. The experience, overall, instilled Snyder with a greater appreciation for other religions and the dynamic intermingling of religion and culture.

“Religion is so intertwined with culture,” Snyder commented. “It centers people around charity, around helping others and coming together. That’s why I value this setting so much — so many people, so many cultures. The religious pluralism element of the competition was so interesting as the theme.”

Delfino, who represented Notre Dame in the US Supreme Court division, also reflected on the power of religion, specifically its role in paving the way for people to seek justice and peace. “People have an innate desire to seek a purpose greater than themselves. Religion calls them to those higher purposes and aids them in recognizing that we are social and communal beings meant to live together and work towards that higher end together. Religion helps keep people on that path and see the greater meaning as to why we should seek justice and peace,” Delfino said.

Although he had never extensively explored the topic of religious liberty before, Delfino was drawn to this competition because he “thought it would be interesting to learn more about US law and to represent the school in an international setting.” The highlight of his experience was watching the other teams argue, especially knowing that most of the oralists were arguing in their second language.

Partnered with Delfino in the Supreme Court division, O’Malley impressed the judges by quoting the Founding Fathers verbatim and from memory. In fact, one of the judges was so impressed with O’Malley’s performance that the judge kept asking him questions for five minutes after his team’s allotted time had already elapsed. O’Malley had come into the competition with an avid interest in religious liberty, particularly in Establishment Clause issues. Currently, he is writing for the Notre Dame Federalist Society blog on religious liberty and civil rights issues, and he is serving as tournament director of Notre Dame Law School’s seventh annual Religious Freedom Tournament, which will take place at the end of this month.

Similar to O’Malley, Wewers had prior knowledge of religious liberty issues from taking the course International Religious Liberty, taught by Professor Mark Hill, during her year spent in the Notre Dame London Law Program. Her oral argument for the European Court of Human Rights division focused on Article 9, which addresses freedom of thought, conscience, and religion. Wewers was especially interested in the comparative aspect of the entire learning experience. “Seeing how similar fact patterns are dealt with in two bodies of law is an enlightening experience,” she said. Wewers argued that pluralism cannot be achieved if people do not feel safe going into their respective houses of worship. In November, she will travel to Brazil to compete in the International Law and Religion Moot Court competition, organized by the Brazilian Center for Studies in Law and Religion.

Competitions like these serve as a launch pad for ND Law students to explore permanent issues related to religious freedom and tolerance. “Pluralism is considered to be a hallmark of a democratic society and is very necessary,” Wewers expressed. “Individuals of all religious affiliations should be able to worship safely and peacefully.”